As described in the previous chapter, when the redo log is recorded during the transaction processing, the checkpoint step for the persistence of the memory DB, and the disk I/O for transaction processing of the disk DB are configured on the same disk, a disk bottleneck occurs. It is recommended to configure the redo log and each area as a physically separated disk in order to minimize the performance downgrade. 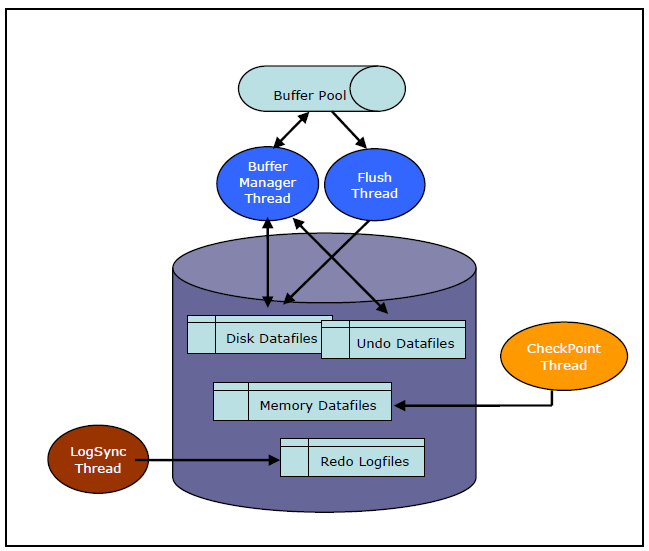 As shown in the figure above, if the redo log record, checkpoint, and disk I/O by the buffer manager are concentrated on one disk, the disk bottleneck cannot be avoided. Therefore, it is recommended for the user to refer to this document for efficient disk configuration.

This is the minimum separation configuration, and this configuration is recommended in the following environments.

Such a configuration can reduce disk I/O contention only when the memory DB is mainly used or only in the service environment of the disk DB where there are not many changes.

This configuration is recommended when configuring various tasks and large amounts of data in a disk DB.

It is efficient from the point of view of distributing disk I/O by composing a separate tablespace by separating complex queries from simple processing queries, and configuring the physical data files of the tablespace into separate disks. However, the efficiency is low in an environment where disk buffer replacement is frequent.

The location of the tablespace related to complex query execution and the method of locating the physical data files of the tablespace on a volume composed of separate disks, mainly for simple processing, can be effective in the sense of distributing disk I/O. However, even with such a configuration, it may be difficult to obtain the expected effect in an environment where buffer replacement is frequent.