By configuring the appropriate file cache, the requirement for swap out the memory area used by ALTIBASE is suppressed. It is recommended to minimize the subsequent phenomenon.

Swapping itself has the usefulness of being able to handle larger application programs or data files than the main memory. However, in systems where long-term resident application programs such as DBMS are operated, the response time of the DBMS becomes irregular due to the disk I/O delay time of the operating system layer due to swapping, or in the worst case, a phenomenon such as a hang.

Therefore, in order to guarantee a consistent response time of ALTIBASE, it is recommended to configure the related file cache and swap kernels in advance so that swap does not occur as least as possible.

It is recommended to refer to the documentation below to properly configure file cache values.

The file system of OS has a structure that improves access performance to a slow disk by caching the file blocked accessed when accessing a file by placing a memory area called File Buffer Cache, as in the form of buffered I/O in the figure below. 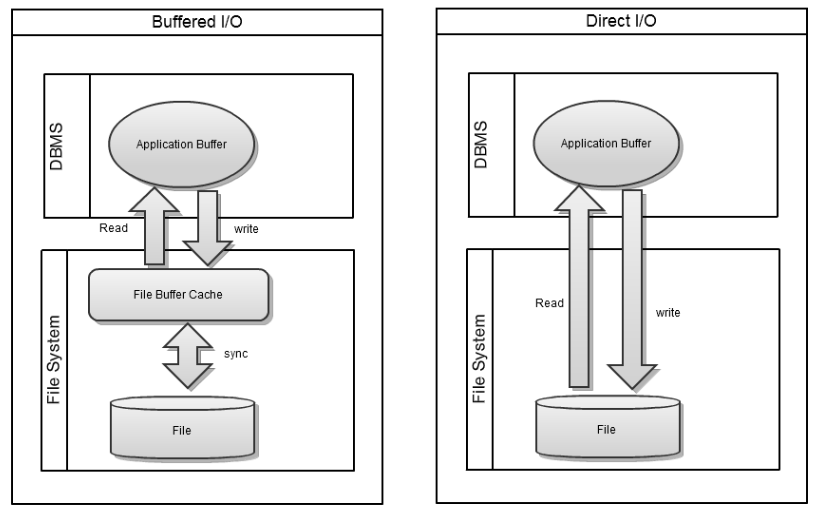 However, if data is cache directly at the application level like a DBMS, there may be an overhead of moving data from disk to the file buffer cache and back to the DB's own buffer cache. This is called "double copying" and in this case, it may result in more CPU and memory usage.

In order for ALTIBASE to I/P data files and log files with the Direct I/O, the following ALTIBASE properties must be configured.

In this case, the file system must be mounted using a specific option as in the example below.

When it is advantageous to use Direct I/O

In a DB where the size of the DB is large and a large amount of modification work occurs frequently, a large amount of disk I/O occurs during the checkpoint process. At this time, CPU usage and memory usage may increase rapidly due to the cost of double copying to the OS file cache and the DB buffer cache.

In this case, using the Direct I/O can be a solution to this problem.

When it is advantageous to use buffered I/O

In most cases, when using a local disk, using a buffered I/O method is more advantageous in terms of performance than using a direct I/O.

The buffer I/O of the OS can read in multi-block and prefetch the required disk page to improve the speed of I/O, so performance tends to improve when using the buffer I/O.

There is no case of performance degradation due to a mismatch between ALTIBASE page size and OS block size.