This Developer's guide describes how to develop in integration with Altibase in the JAVA environment and matters to consider during the development. Altibase version 6.5.1, JRE or JDK is version 1.5, and development IDE is based on Eclipse.

In addition to this document, please refer to the following documents during the development.

Settings before the development

Altibase JDBC Driver is required to integrate with Altibase in the JAVA environment. This section describes the Altibase JDBC driver.

Altibase provides two types of JDBC drivers, and the location of the file is $ALTIBASE_HOME/lib directory.

How to integrate with Altibase with different versions using Altibase.jar and Altibase6_5.jar is described below.

It is compatible if the cm protocol versions of Altibase DB Server and CMP of Altibase JDBC Driver are the same.

The command to check the Altibase JDBC Driver version is as follows.

The command to check the Altibase DB Server version is as follows.

Generally, it is recommended to use the latest Altibase JDBC Driver file of the same or later version than the Altibase DB Server version.

This section describes how to set the Altibase JDBC Driver.

How to set it up in JRE

Use one of the three methods presented below.

How to set it up in Eclipse

This section describes how to add Altibase JDBC Drive in Eclipse is as follow. 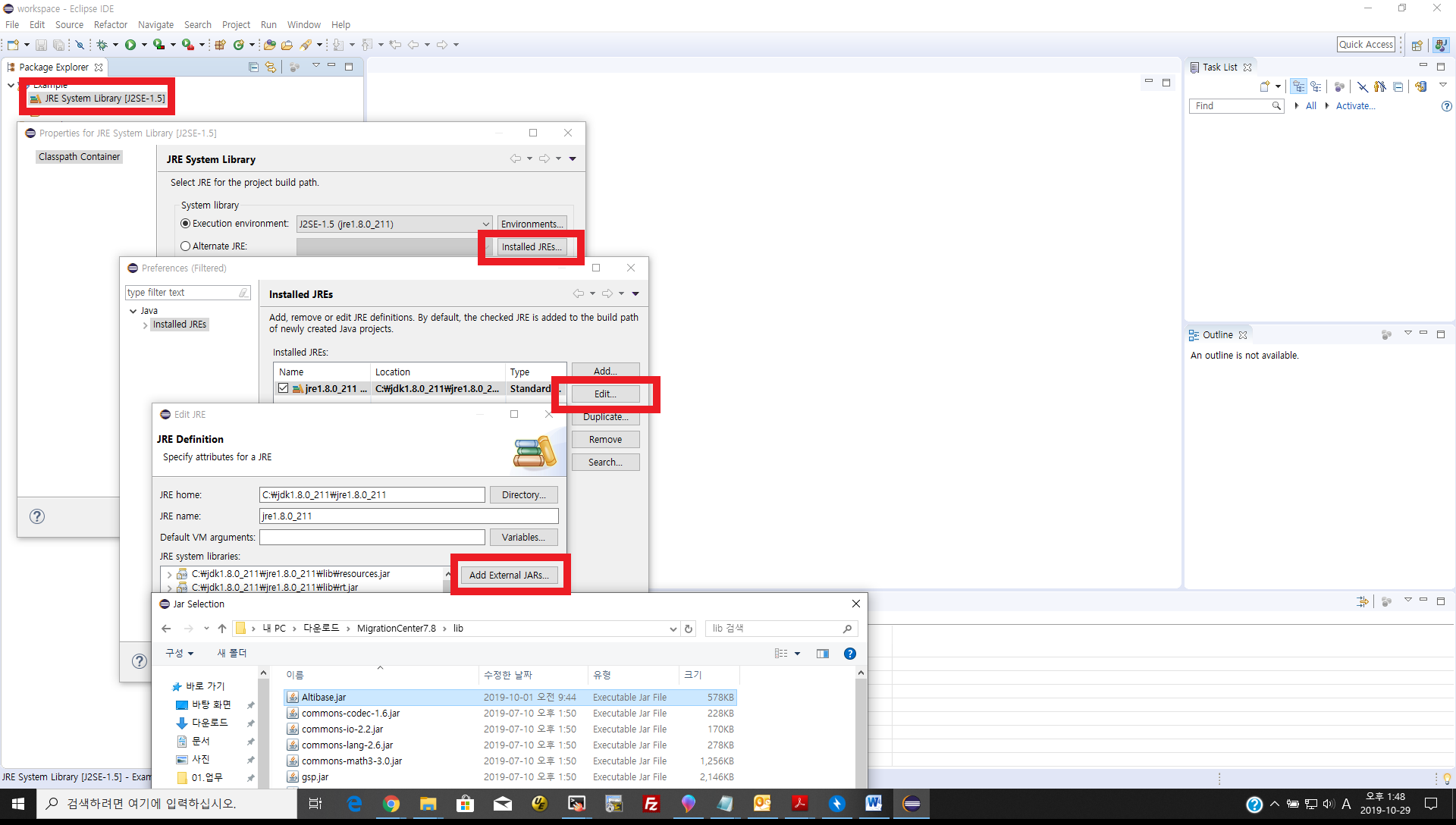 This section describes how to load the Altibase JDBC Driver and connect to Altibase.

The following is an example of the code that loads the Driver by calling the Class.forName method.

When receiving a connection object from JDBC, the DriverManager.getConnection method is called.

At this time, the String type url should be entered as an argument. An example of writing the Altibase connection url is as follows.

The following is an example of receiving a connection object according to the above format.

The following is how to lookup the DB_Name.

Property to be set during the Connection

When connecting, the user can specify various properties including the user name and password of the db. Properties can be specified by using the java.util.Properties class, or by connecting to the String url part in the form of &property_name=value.

The properties that can be specified are as follows.

The followings are examples of specifying the property.

If necessary, the following properties can be applied to the ConnectionPool.

Starting from Altibase version 5.3.3, the user can define Failover-related properties in the connection url part.

Failover-related properties are as follows.

Starting from Altibase version 5 or later, an additional Altibase Driver (Altibase5.jar) is provided so that one application can access the later or earlier versions of Altibase at the same time. The name of the driver class is defined as Altibase5.jdbc.driver.AltibaseDriver.

In order to connect between the Altibase version simultaneously, the user must first load Altibase5.jdbc.driver.AltibaseDriver.

Because DriverManager of IBM Java 1.6 version handles exceptions immediately without retrying, the URL including the cm protocol version must be specified in the connection string.

The following is an example of configuration considering the characteristics of DriverManager of IBM Java 1.6.

When calling the stored procedure created in the DB, write the call SQL statement as follows.

The following is an example of calling store procedures and functions.

This section describes the considerations to be referred when developing JAVA.

PreparedStatement is an object that creates SQL statements in advance and binds and processes values with parameters as needed.

if the bulk DML statement is required, if executeBatch() is used, it is recommended to use array processing to store multiple data in an array and send them to the server at once.

To use it, first, use addBatch() to keep n data in the array and execute executeBatch().

If the user uses the setFetchSize() method, the user can specify the number of records to be fetched from the DB server at one time when searching.

However, because the memory of the client increases in proportion to the number of records specified in the setFetchsize, it is recommended to specify a large value of setFetchSize.

When finishing using the Connection, Statement, or ResultSet object, the close() method must be explicitly called to return the resource.

If close() is not called, unused Connection, Statement, and ResultSet objects may remain in the heap memory. In particular, if the statement object remains in the heap memory, the DB server continues to store the SQL prepared contents. As it should be done, unnecessary memory of the DB server increases. (The same is true for PreparedStatement).

When using a PreparedStatement object, setObject() and setNull() method can be used to set the NULL value.

In order to process LOB data, autocommit must be set to off.

If LOB data is processed while autocommit is on, “Connection is in autocommit mode. One can not operate on LOB data with autocommit mode on” error or null value may be returned, resulting in unwanted results.

Since autocommit is on by default in JDBC,  LOB data must be processed after calling setAutoCommit(false); of Connection.

For an example of integrating LOB data, refer to $ALTIBASE_HOME/sample/JDBC/CLOB and the java source file in the BLOB.

How to use REF CURSOR

How to use REF CURSOR in Java Program is as follows.

This section describes errors frequently encountered during the development.

When a client program requests a task to the DB server, a client error message is returned, and an error log is recorded in the server.